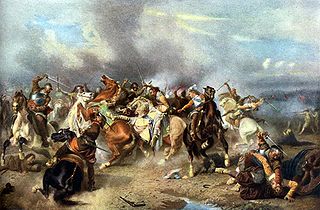 The Palatine town of Glan-Münchweiler, and the villages of Nanzweiler and Dietschweiler, are located in the valley of the Glan river, a small tributary of the Nahe river which runs into the Rhine.  The Palatine or Palatinate (die Pfalz) was a collection of lands consisting of the Lower Palatinate (Rheinpfalz, lands on both sides of the Rhine river) and the Upper Palatinate (Oberpfalz) north of the Danube. It was ruled by the hereditary Count Palatine and a set of Electors, or appointed Dukes.The Oberpfalz was seized by the Duke of Bavaria in the seventeenth century and remained part of Bavaria, so in the eighteenth century the Palatine was mainly the lands around the Rhine river.

The first Catholic church in Glan-Münchweiler was established in 750 A.D. by monks sent by Saint Pirminius from the abbey in Hornbach. There followed a period of centuries where Catholicism was the religion and the valley of the Glan was passed among various branches of the Palatine nobility. In 1486, by means of George I 's marriage to Eva Mauchenheimer, parts of the area came under the rule of the Dukes of Leyen (von der Leyen).

The Reformation started in 1517 with Martin Luther posting his list of grievances on the church door. This started a religious revolution that resulted in the establishment of several “Protestant” sects, including the Lutherans, the Reformed church, and the Calvinists. The Peace of Augsburg (1555) allowed rulers to decree the state religion of their subjects and the Palatine became a predominantly Protestant region.

In 1555, the first Lutheran pastor, Theobald Röhrich, arrived in Glan-Münchweiler. Although many Catholic families remained, the dominant religion of the area became Lutheran. After 1556, there was no Catholic parish in Glan-Münchweiler. The state-sanctioned religion, as well as religious tolerance, was at the whim of the ruler. This resulted in frequent changes of policy. In the Palatine between 1559-1610, there were four changes in state religion, alternating between Calvinist and Lutheran.

The aging Holy Roman Emperor, Rudolf II (1576-1612), was a weak and ineffective presence, which allowed ambitious princes to exploit the power vacuum. The Protestant Union was formed in 1608, led by the Palatine and Frederick V, the Count Palatine. In 1609, Bavaria and Prince Maximilian I formed the Catholic League. Emperor Rudolf was succeeded by Mathias in 1612, and Mathias and his court set about trying to restore the influence and power lost by the Empire.

In 1619, Bohemia deposed its king and the Count Palatine Friedrich V was elected King of Bohemia. The Holy Roman Emperor considered Bohemia to be part of its domain, and war ensued. The Emperor was supported by Catholic states while Protestant states tended to remain neutral. The Count's army was quickly defeated and the Palatine was invaded and devastated. Other states joined in, and what followed was a period of widespread warfare lasting for thirty years. 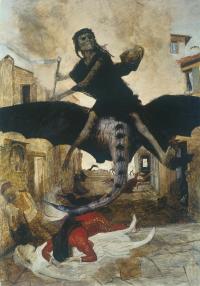 In the Palatine, the war saw armies from many nations, including France, Spain, Sweden, and Bavaria sweep back and forth over the land. The populations either fled or were killed and villages were burned, leaving large areas of the Palatine relatively unpopulated. It is estimated that as much as 60-75 percent of the population of the Palatine was lost and most villages were destroyed. To add to the misery, in 1621 the Plague struck in Glan-Münchweiler, killing hundreds over a period of years.

The Peace of Westphalia (1648) ended the war but it took a long time for the affected areas to recover. The new ruler, Karl Ludwig, son of the deposed Frederick V, tried to preserve the peace and rebuild the countryside. He enlisted foreign support and recruited immigrants from various parts of Europe, including Holland, France, Baden, Switzerland and Austria, to repopulate the Palatine. He encouraged tolerance and acceptance of all religions and nationalities. Austria supplied carpenters and masons, such as Conrad Strasser, to rebuild the churches and homes destroyed by the war. Other areas supplied farmers and tradesmen. Despite the recruitment, in 1660, Glan-Münchweiler and the other villages in the parish had a total of 44 households:

As part of the Peace of Westphalia, the principle of “cujus regno, cujus religio” was again decreed. This meant the religion of the population should match the religion of the ruler. However, the new ruler of the Palatine, Karl Ludwig, tried to impose religious tolerance along with his Protestant faith. In Glan-Münchweiler during this period, there was only an Evangelical church to serve the population.  The Catholics in the area were forced to use the Evangelical church registers to record their baptisms and marriages. The early records of Jacob Veldin’s family in Nanzweiler appear in the Glan-Münchweiler Evangelical church records, starting in 1664 with the baptism of his daughter, Maria Catharina.

During this time, Elector Karl Ludwig allowed his daughter to marry a French duke, hoping it would improve relations with France. Unfortunately, Karl Ludwig died without a male heir. The French then claimed territory, precipitating a period of turmoil. The new ruler changed the religion to Catholic and used French troops to impose the new religion. The Catholic parish of Glan-Münchweiler was established by decree on 29 November 1684. The turmoil can be sensed by viewing the Evangelical church records for this time period. Records become terse, then taper off and disappear. They do not restart until 1699, when a Protestant pastor returned to Glan-Münchweiler.

From the above short history, the following observations of genealogical interest can be made: